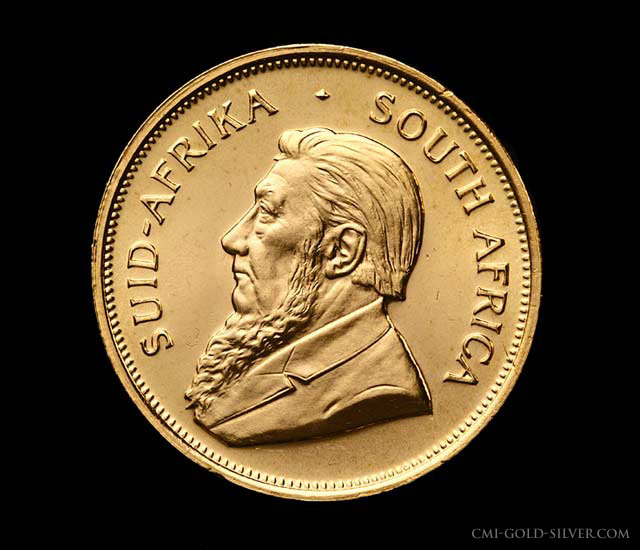 The 1-ounce gold Krugerrand is 91.67% fine gold, and weighs 1.0909 troy ounces. It is distributed from the South Africa Mint in tubes of 10 and/or 15 coins per tube. Its diameter is 32.7 mm, thickness 2.83 mm.
Gold bullion coins got their start in 1967 when South Africa introduced the Krugerrand.

South Africa is the largest producer of gold in the world, and the Krugerrand helped the country to market the vast stores of gold coming out of the deep mines around Johannesburg.

The convenience of a legal tender gold bullion coin, exactly one ounce of pure gold, guaranteed by a government Mint for weight and purity, made The gold Krugerrands is the predominant way for individuals to buy gold bullion in the 1970’s.

With the demise of gold as legal tender coins in the first half of the 20th Century, the only gold struck came to be special presentation pieces and collectors issues, not the old fashion gold-for-money’s–sake gold coins as had been produced for thousands of years prior. Gold-for-gold’s-sake was pretty much bullion bars, a form of gold whose ownership was restricted in the United States from 1933 to 1975. Gold coins came to mean coins of numismatic or collectors value, coins which traded for prices far in excess of their gold value.

The South African Government changed that with the introduction of the Krugerrand in 1967.

Here was a coin, with legal tender status, purposefully made to trade just for its gold value and the small cost of manufacture and distribution. South Africa foresaw that gold ownership would become increasingly popular among private individuals as the U.S. dollar was no longer a fixed amount of gold.

With the weakening of the dollar, the monetary standard of the world was changing, and gold would play a growing part in those changes.

The South African gold Krugerrand has made gold ownership simple by providing a one troy ounce unit of gold that was easy to buy and sell all over the world. Instead of odd-weight bars of gold, the market for private gold owners now had the convenience of mass-produced bullion coins.

Later, other countries followed suit and produced their own bullion coins, but not before tens of millions of ounces of gold Krugerrands were sold all over the world.

(Krugerrands are commonly misspelled as Krugerands)