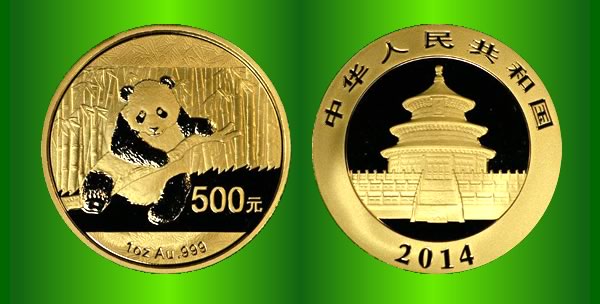 The 2014 Panda gold coin from China has arrived, the 32nd different design in this always-popular series of .999 gold coins. China’s first Panda coin in 1982 pioneered the concept of a limited-edition gold bullion coin. Pandas are struck at the Shenzhen Guobao Mint in sizes of 1-ounce, half-ounce, quarter-ounce, tenth-ounce, and twentieth-ounce. We offer these new coins still sealed in the flexible plastic holders in which they left the Mint.

The .999 fine gold Panda series, launched by the People’s Republic of China in 1982, became one of the most successful bullion coins of the 1980’s. Response in the U.S. to these warm and fuzzy little panda images was very positive, and the concept of a premium-priced bullion coin was established, as the gold Pandas became popular collectibles.

In the past few years, the Panda has become more and more popular with gold buyers in China and around the world.

By changing the design every year, the Chinese were able to build a steady demand for these products regardless of gold price fluctuations.

Gold Pandas also encouraged jewelry use, as the one ounce coins were set in necklace mountings, and the smaller sizes were sold in pendants, bracelets, and earrings. Panda coin jewelry became quite an item in the U.S., and the rest of the world.

Pandas are issued by China at a higher percentage over the actual gold price than standard bullion coins, and pioneered the idea of a modern collectible/bullion coin. 1982 was the first year the Panda was issued, and by 1987 collector interest was so high that specimens of the one ounce 1982 Panda traded for over $3,000.

Other early year Pandas also sold for big premiums in the after-market at that time, and Panda mania was on. China found itself sitting on a gold mine, so to speak, and expanded their product line to meet the growing demand. Very few collectors were buying the yearly new-issue Pandas.

Today, when the Panda issues from the 1980’s come on the market, they bring a fraction of their 1987 high prices. However, the dated coins from the mid-1990’s are hard to find, as the mintage figures were then much lower than during their heyday.

Demand from China itself is starting to expand, which may become a significant factor in the future, both for current and past issues. In the meantime, the gold Panda series continues to roll along.

Special Proof Sets were issued of the gold Pandas, presented in lacquered boxes with silk linings, and marketed for more than twice the gold value. Enormous 5- and 12- troy ounce gold Panda “hockey pucks” were issued in limited numbers, and at huge premiums.

Also, additional commemorative issues of Panda gold coins seemed to appear at the drop of a hat. At coin conventions in the late 1980s, where these limited edition special issue Pandas were distributed, buyers lined up outside around the block just to get the chance to purchase them.

By 1987, China offered the regular Pandas with two different mint marks, the boxed Proof Set with a third mintmark, plus a 5- and a 12- Ounce giant Panda. The Panda collector found herself looking at an investment of about $20,000 just to have one each of the multitude of 1987 Chinese gold Pandas issues.

Although China still issues low-mintage special editions of the Panda from time to time, most buyers of gold Pandas concentrate on the bullion-priced 1-ounce and smaller sizes.